The Kwara State Government wishes to once again make clarifications regarding ts position on the ownership of schools and the question of hijaab.

The Govermment of Kwara State, Ike in most parts of Nigeria, took control of many schools in 1974. Original ownership of these schools cut across faiths and private individuals across the country. Since the takeover, the state government has controlled, managed, wholly funded, and staffed these schools which were run and are still being run as public institutions. All of these are backed by various state laws, especially the Kwara State Education Law of 1996 (CAP E1 of the Laws of Kwara State). These laws are very clear about Status of these schools and the rules guiding them. Such rules include pluralism in the recruitment of students and teachers. These schools, being public-owned are to adhere to policies of the government 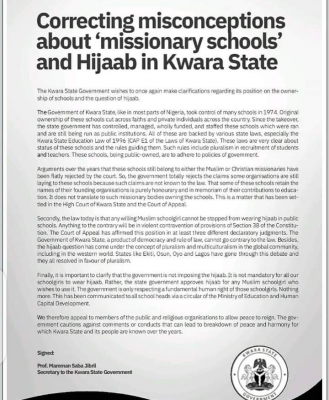 Arguments over the years that these schools still belong to either the Muslim or Christian missionaries have been finally rejected by the court so, the government totally rejects the claims some organizations are still laying to these schools because such claims are not known to the law. That some of these schools retain the names of their founding organisations is purely honorary and in memorial of their contributions to education. If does not translate to such missionary bodies owning the schools. This is a matter that has been settled in the Hgh Court of Kwara State and the Court of Appeal

Secondly, the law today is that any willing Muslim schoolgirl cannot be stopped from wearing hijaab in public Schools. Anything to the contrary will be in violent contravention of provisions of Section 38 of the Constitution. The Court of Appeal has affirmed this position in at least three different declaratory judgments. The Government of Kwara State, a product of democracy and rule of law, cannot go contrary to the law. Besides, the hijaab question has come under the concept ot pluralism and multiculturalism in the global community, including in the western world. States ike Ekti, Osun, Oyo and Lagos have gone through this debate and they all resolved in favor of pluralism.

Finally, it is important to clarify that the government is not imposing the hijaab. It is not mandatory for all our all our school girls to wear hijaab. Rather, the state government approves hijaab for any Muslim schoolgirl who wishes to use it. The government is only respecting the fundamental human right of those schoolgirls. Nothing more. This has been communicated to all school heads via a circular of the Ministry of Education and Human Capital Development

We, therefore, appeal to members of the public and religious organizations to allow peace to reign. The government cautions against comments or conducts that can lead to a breakdown of peace and harmony for which Kwara State and its people are known over the years.