Following the frequent cases of kidnapping and other forms of security challenges going on in some towns and villages of Kajuru Local Government area, the Director General, Kaduna State Schools Quality Assurance Authority in a letter have directed all Principals and Proprietors of both Public and Private Schools in Kajuru Local Government area to close down all Schools with immediate effect. (as from today 16th March, 2021).

The letter also directed that no School should re-open until directed to do so. 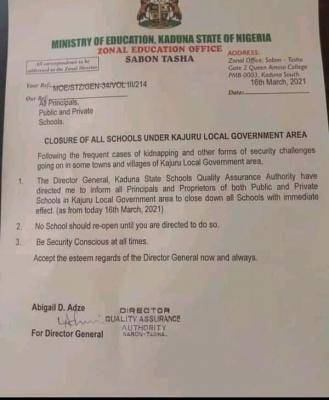 He equally advised everyone to be security conscious.