A 15-year-old SS3 student from Ijebu in Ogun state, Miss Faith Odunsi, has emerged as the winner in an international competition, ‘The Global Open Mathematics Tournament’, thereby defeating contestants from the US, UK, and other countries.

During an interview with newsmen, Faith revealed that winning the “tough competition” made her happy and honored. 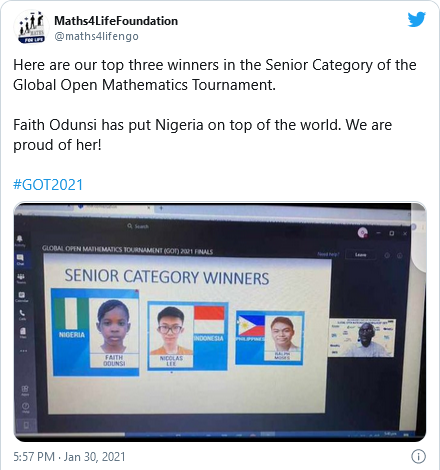 According to Faith, she made sure the competition did not affect her academic activities and she mostly had her extra maths classes with a coach after school period. She further revealed that she studied at night from 11 pm to 12 am for the contest.

As the winner of the contest, Faith was presented with a monetary award of $1,000 (N379,000, according to the CBN’s current exchange rate). The organizers are expected to do the official presentation of the award for the contest.

Faith had earlier received a Record Holder Award, for the highest number of questions answered on Cowbellpedia competition in the junior category where she answered 19 questions in 60 seconds.