It is hereby announced for the information of the general public that there will be restriction of movement between the hours of 12midnight on Friday, 5th March 2021 to 4.00pm on Saturday 6th of March, 2021.

Therefore only those on official and emergency duties with valid means of identification as well as the electorates with permanent voters cards going to their registered polling units to cast their votes will be allowed passage during the restriction period. 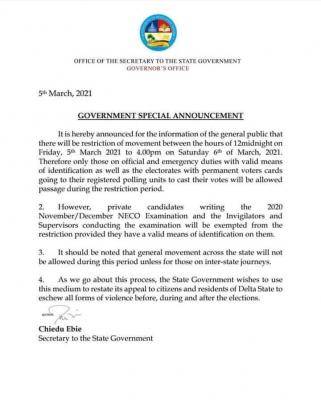 Private candidates writing the 2020 November/December NECO Examination and the Invigilators and Supervisors conducting the examination will be exempted from the restriction provided they have a valid means of identification on them.

3. It should be noted that general movement across the state will not be allowed during this period unless for those on inter-state journeys.

4. As we go about this process, the State Government wishes to use this medium to restate its appeal to citizens and residents of Delta State to eschew all forms of violence betore, during and after the elections.