Former US President, Bill Clinton Calls Out Buhari Over Killings Of Young Protester In Nigeria

Former US President, Bill Clinton has taken to social media to show concern over report of killing unarmed #EndSARS protesters in Nigeria.

Taking to his Twitter handle, Bill Clinton expressed his concern over the ongoing unrest in Lagos and urged the Nigerian government to engage in peaceful dialogue with protesters and end corruption.

He wrote: “I am deeply concerned over reports of violence in Lagos and urge the Nigerian government to engage in peaceful dialogue with the #EndSARSprotestors for police reform and an end to corruption.” 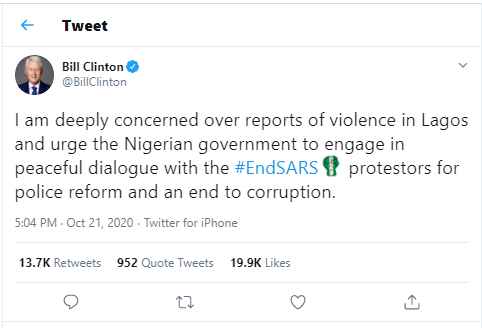