Student Found Dead 10 Days after she was Declared Missing

A 19-year-old student named Shalewa Adebowale, who had earlier been reported missing by her family has been found dead, 10 days later.

The deceased cousin Ayokunle, confirmed the sad development via Twitter on Tuesday evening, October 20. He didn’t give more details about the circumstances surrounding her death, except that she was found dead. We found my cousin, but unfortunately, we found her dead. We hope she’s in a better place. Thanks to everyone who reached out and reposted” he wrote

The deceased had gone missing shortly after calling her father on the phone saying “she was dying” and needed help on October 11.

According to reports, she left her parents’ house at Olorulogbo, Anthony village, Lagos, on October 10, 2020, to sit for an exam, and  decided to spend the night at a cousin’s house in Igando after the exam ended late.

Afterwards, Shalewa left the cousin’s house on October 11, to board a bus at Checkpoint bus stop, LASU Road, en route to Iyana Ipaja. The last time her family heard from her was around 7.09pm on October 11, when she called their father asking for help

Her whereabouts had been unknown since then. 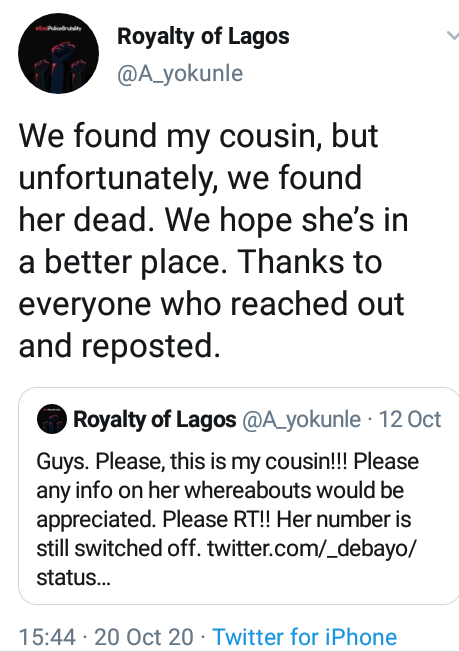