The National Association of University Students (NAUS) has called on students to join the nationwide protest scheduled for October 20th, 2020 for the demand of immediate end to the lingering ASUU strike This was contained in a statement signed by the official of the union.

The statement reads, “The National Association of University Students (NAUS) being the highest decision-making body of all university students in Nigeria invites you to a Nation wide protest to demand the immediate End to ASUU lingering strike. 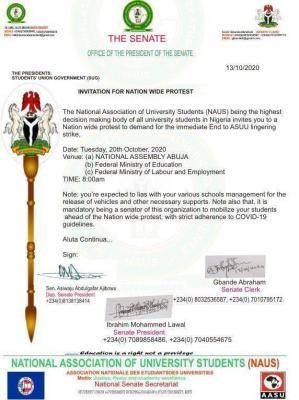 (b) Federal Ministry of Education

(c)Federal Ministry of Labour and Employment

Note: you’re expected to lias with your various schools management for the release of vehicles and other necessary supports.

Note also that, it is mandatory being a senator of this organization to mobilize your students ahead of the Nation wide protest with strict adherence to COVID-19 guidelines.

Sign:protest on October 20th to demand an end to

Gbaprotest on October 20th to demand an end to nde Abraham